Every opera composer would like to think that their works will keep being performed long after they die. If only Bizet could have suspected that Carmen would never disappear from the theatres after his death! However, this is not what usually happens. Hadn’t it been for d’Indy’s efforts, we might not be enjoying Monteverdi’s Incoronazione, for instance. You may argue that if not him someone else would have done it afterwards, and that’s exactly my point: an effort must be done to revive a long-forgotten opera -and a big one! This effort may become even more dramatic if the city where you are trying to do so is heavily commercialized even for the Arts. We must be happy to have the Chelsea Opera Group trying hard to offer us high standard rarities in London.

Last night it was the turn for Christina, Queen of Sweden, by Italian maestro Jacopo Foroni. Like Bellini he died young, at the age of 33. However he managed to become the Swedish court composer and completed 4 operas. Cristina attracted the attention of the Swedish Vadstena Summer Opera Festival thanks to the depiction it does of their Queen’s abdication in 1650. Premiered in 1849, the opera follows all the Italian Romantic standards: weak libretto full of cheesy love stories mixed up with war and high morals; music full of waltzes and marches, with a strong melodic component and some coloratura for the main role, as well as powerful choruses. If you know Nabucco, that’s the idea -even the cast is so similar. Well, I have to admit this is not my favorite opera type, but for the young Verdi fans Cristina is a not-to-be-missed! 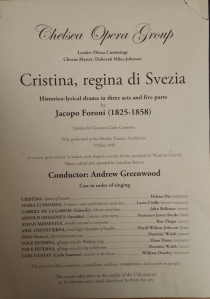 The opera starts with a beautiful, long Overture that made us realize this unknown piece would be much more enjoyable than we suspected. Andrew Greenwood was superb with his baton, empowering the orchestra with clarity and enthusiasm. He got round beautiful sounds out of this bunch of amateur musicians who time after time surprise me with their amazing level. Their tuttis are powerful and strong, and their soloists do a great job too. They just need to work a little on the chamber passages (trios, quartets), which sometimes lack unity -and they were for me the most interesting parts of Foroni’s orchestration.

The full company about to sing the last Finale yesterday evening at the Cadogan Hall.

The Chelsea Opera Group casts very well their soloists: beautiful voices with the style and technique needed for this repertoire. William Dazeley and David Wilson-Johnson were the perfect counselors with their lower, rotund voices. Lucia Cirillo and John Bellemerand played beautifully the lovers parts with the perfect colours. But as it’s usual in this kind of opera, the title role is the toughest: Helena Dix hardly had any rest time, and she made the audience really enjoy with her beautiful filatos and long high notes. They were all fantastic, even though the acoustic was not the best to have them in front of the orchestra -I really wished there was a pit so many times yesterday! I cannot end the review without mentioning the amazing work that the Chelsea Opera Chorus has done for this work: a powerful mass, rich in texture. A big hats off to Deborah Miles-Johnson, the chorus master, who has achieved something that last year seemed impossible! The next step is just to get them to keep an eye on the conductor.

My congratulations to the whole company for the level achieved in the performance and for their commitment to revive lost operas in London. I am looking forward to Le roi de Lahore already!

There was an error retrieving images from Instagram. An attempt will be remade in a few minutes.

Time to hit the #slopes again! #LesArcs here we come!!! 🎿⛷🏂
I guess that when it feels really hard, that's been a really good #wod... #CrossFit #box #yesIcan