If you wanna see a show, a business-marketed performance with choreographies, fireworks and all kind of delights for your senses, this isn’t your deal.

If you wanna attend a good concert, then go see Eli Paperboy Reed and the True Loves. God, that was amazing! Pure music, great tunes, better vibes… all fun!

Maybe you still haven’t heard of him, of his true contemporary soul style, of his heart-touching lyrics and mind-blowing voice (and this, I mean it literally: first he’ll ripe your hair, then the scalp, skull and then the brains! Such is the power of his prodigious vocal chords!!). It’s alright, he’s not an artist craving fame, aiming to reach huge audiences. How come? Because he just loves what he does and he prefers to have a big fun night with a smaller but much more dedicated and enjoyable audience.

That’s what happened tonight. He arrived, we expected him, he delighted us, we answered to him. Whatever he sung: his upbeat tunes, heartbroken songs, unreleased singles, covers… we loved it all. When the music is there it doesn’t mind that he wears a suit with black home slippers with a pirate skull on them, or that he stomps like killing cockroaches or dances sometimes like a toddler… So what? He’s having fun, he’s giving his best, we saw him force his voice to the extreme tonight, all for us, all for the music. We danced, we shouted, we sung, we even cried! All this and more, he’s able to get out of us…

And what to say about the incredible band that supports him? The greatest mood (special mention to trumpeter and drummer there), professionals enjoying their work in order to make us have fun with them! Again, even if the band wasn’t chosen because they look like Austin Powers’ brother, a fusion of the two LMFAO, the producer from Showgirls, Bob Marley with Stevie Wonder’s groove, Eddie Murphy with a goatee and Elijah Wood crossed with Orlando Bloom, they’d still be just as enjoyable cause they play (AND SING) wonderfully – I don’t remember dancing so carelessly in a concert for a long while.

We’re already looking forward to getting the new record, that’ll be available in around one month he said (Yeeha!). Meanwhile, we’ll keep in mind moments such as the two covers (“Call your Boyfriend” was good, but “Love on Top” was absolutely out of this world), the beginning of “I’m in love” when he sung without a mic, the new single to be released next week or some of his greatest hits such as “Satisfier” or “If you want the love of a man”.

Unforgettable will also be the moment when he sung for, high-fived and apologized to my dear girl-friend @lulaleb , who was texting a friend among heartbroken tears from listening to some of the lyrics… That’s the danger of being in the first row. The reward is to feel his power and be able to make him smile with a “Sing it, bro!”.

Don’t miss Eli & the True Loves next time they’re on town or you’ll regret it forever! 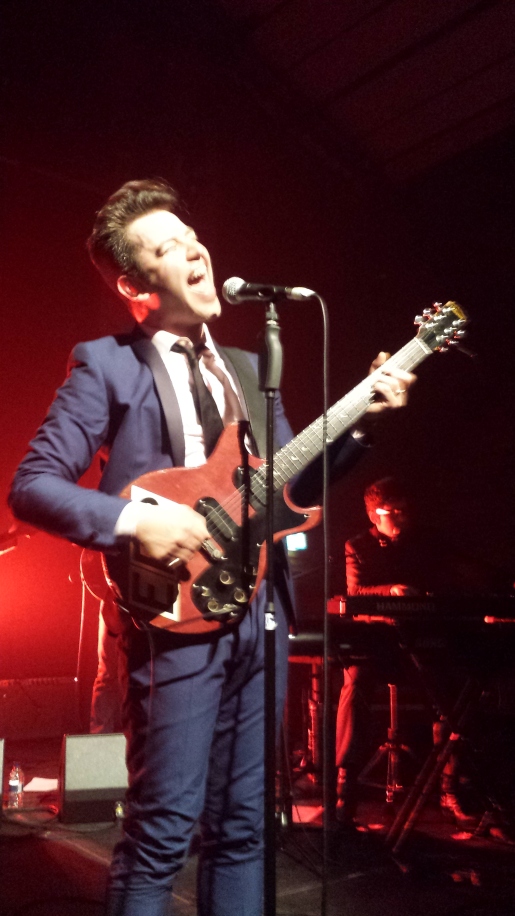 Alright, not a great shot in quality, but it’s quite representative of the spirit of Mr. Reed on stage… (Copyleft, Myself)